One of the major symptoms of ADD/ADHD is the avoidance cycle. Poor access to specific brain functions result in difficulty performing tasks that are dependent upon these brain functions and this difficulty will generate stress when trying to perform these tasks, often resulting in avoidance behaviors. 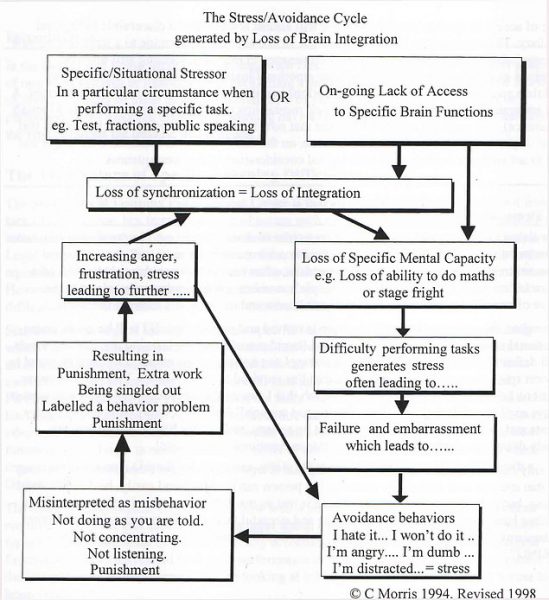 The extent of these behaviors is related to the stressed cause by trying to integrate these functions.  The brain is born with the desire to learn and we begin learning in the very first moments of living.  But when integratiion of certain areas of the brain fails and learning becomes difficult, it is a natural reaction to avoid the stressor to begin with, triggering a cycle that is on a continuous repeat.  Often people who suffer from SLDs are highly intelligent, alert and creative people so it is easy to misunderstand the stressor/avoidance behavior as a lack of focus or persistance.  It is important to remember that a fully integrated brain is not likely to avoid learning,  so if a child is avoiding reading for example, it is because reading is creating a stressor, not because he or she isn’t focused.  We often tell the child to reread something or to look and stay focused and in doing so we trigger the avoidance cycle.

For example, if you were to be asked “do you know how to hammer a nail?”, your answer would likely be “yes”.  Furthermore, if you were to be asked “will you hammer a nail for me?” again the answer would probably be “yes, I just need a hammer.” However, if your hands were tied to your feet, your answer might still possibly be yes to the the question “do you know how to hammer a nail?”, because of course you do know how. But being tied up would mean that you could not perform the function asked in the second question.  If we just ignore the lack of accesss or in this case the hands being tied and said “come on now, hammer that nail!”, you would likely become frustrated and angry because you could hammer that nail if you could only untie your hands.

The only difference between this analogy and the lack of access in brain functions is the direct awareness of why you were unable to hammer the nail.  Sufferers of SLDs, and the parents and teachers around them, rarely understand why they are not able to perform certain tasks causing great levels of frustration. This frustration or anger by not being able to read or spell is then exacerbated by the urging from parents and teachers to try harder. As seen in the image above this cycle only accelerates. Furthermore, these highly intelligent children are surrounded by peers who are not quite as clever but can perform all of the tasks being asked of them, leading to poor self-esteem and confidence.

Fortunately, Crossinology® Brain Integration Technique is able to locate these blocks and release them permanently, helping to end this cycle and build back confidence which in turns help to reverse the cycle.